Having been so impressed with my regulating of his .375 double rifle that he once shot a running boar with at a measured out 85 paces with one shot he commissioned a .300 rifle. Again based on a CZ action but we completely machined the top off it and fitted Smithson mounts. A new Border barrel was fitted with a one off quarter rib and iron sights and the whole thing tastefully engraved by Marcus Hunt. The customer wanted quality and workmanship. Not a looker. But I think it is a looker too. Sadly he passed away and I have managed to acquire it as a memento and virtual catalogue. 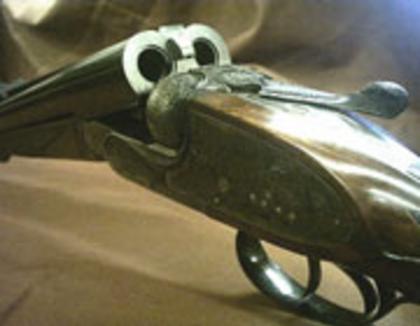 This is a video of me (filmed by my son on a Blackberry phone some years ago!) shooting a .500 3" Nitro Express double rifle. I was hired to regulate point of aim for the gun maker that built the rifle. I have made a few of the barrels for the maker also. The .500 is one of my favourite rifles. 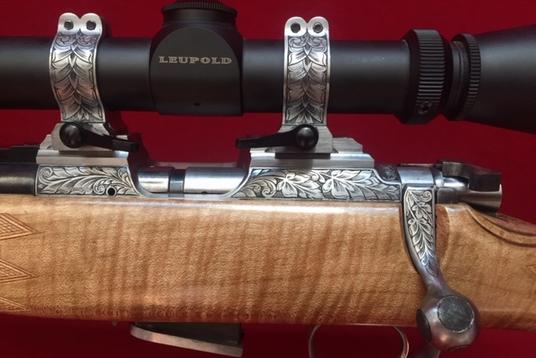 Phil is very busy with repairs and alterations these days but every now and then he gets asked to make something bespoke and is always that extra bit special. Especially one of his bolt rifles. Stunning stalking or big game rifles stocked either in Walnut or Maple for the smaller calibres for something different.
He would be happy to discuss your requirements as he can produce a stunning yet practical bolt rifle for you and your requirements.
From Purdey and Holland & Holland he has over 30 years' experience of making barrels in side by side, over and under and double rifles.
Whatever your needs, he can cater to them.
Philip not only produces guns for his own customers, but his work is so skilled, that he is sought after by other gunmakers, and produces barrels for some of the most renowned gunmakers in the country.
Bozard & Co has a reputation for producing some of the highest quality gun making work available.

I re barrelled this .458 win mag Auguste Francotte double rifle to .500 3" Nitro Express at the request of a Spanish client. He much preferred this calibre but I also made sure the .458 barrels still fitted so he had the choice of either barrels as they were "interchangeable" as we say in the gun trade.

The Francotte was a beautifully made rifle in the style of Holland & Hollands "Royal" double rifle.

No not the infamous Lincoln County one but I am available to regulate your double rifles to your required distance. With over 35 years experience I can get your double grouping as a best double should.

This was a one off triple barrelled 28 bore I made for another gun manufacturer. So one off that when I asked the action filer about drawings and measurements he replied "I have no idea. You make the barrels and I'll build the action around it."

So I did. The key was to put the 3 barrels as close as together as safely and practically possible. On top is a pair of 28 bore chopper lump side by tubes (lumps removed) And on the bottom is a single bottom barrel for an over and under set of barrels.

Jointed like an O/U this kept the depth of the action no different to say a Beretta O/U. Lots of companies make "drilling" style actions but again, we wanted to be different.

This could possibly be the most fancy one off .17HMR bolt rifles made. It was created for a L/H customer who I still see regularly. The rifle was stocked in maple wood. It has a safari style quarter rib with iron sights, flip over "moon" sight, steel engraved grip cap and toe and heel plates. Hand made magazine floor plate and a shotgun trigger guard attached to a one off trigger plate. Bullet trap and hand engraved Talley tip off mounts. We blacked the barrel but kept the receiver 'in the white' to show off the bold hand engraving by Peter Ashford. The mounts were made from solid pieces also. A truly unique rifle based on the CZ action with one off safety lever.

Cased in a bespoke case by T.E.G. 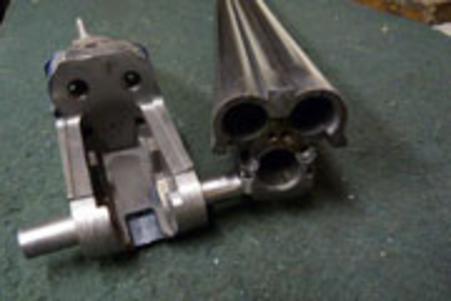